All of you who have chosen to roll over and sign up for Obamacare are SLAVES…useless, no courage, braindead, hypnotized, programmed zombie slaves. When your Nazi leader finally goes over the cliff, I hope each and everyone of you who support him go right over with him. All the info we have given you, all the corruption, lies, and deception we have exposed, and STILL a large percentage of you are so weak and clueless that you will do whatever your masters say without question. Why? Because you slaves are so calcified, you have no clue who and what you really are, and you are just as much a part of the cancer as the globalist pig scum who you allow to rule you. Fucking pathetic. Keep eating the processed food and drinking fluoridated water and watching your fucking televisions. That’s all your meaningless lives amount to. Such a sad and tragic waste of the true potential of our decaying humanity.” When will you robots wake up and free yourself from the chains that bind you to the shadows and echoes of your cave? YOU ARE NOT HERE TO BE SLAVES. How fucking hard is that to comprehend? Scrapping and slaving for your shitty little paychecks…do you think your masters worry about paying bills? Do you think they eat the same crap they offer you to eat? Do you think they drink the fluoridated water? Do you think they sit on their asses and watch television and not communicate with one another? That is why they continue to dominate you, because YOU keep feeding into their agenda. But I’m no idiot, I’m well, well, well aware that this falls on mostly deaf ears, but as long as one of you gets it and discovers how to self-empower yourselves, a difference is made. All anyone can really do is play their part to make a difference toward the good as opposed to not doing anything while your masters continue to feed from your energy like parasites. YES, they are the parasites, but they have you all thinking backwards. Such a mess, such a tragedy, and you can hate me all you want for telling you this…that’s YOUR problem, not mine. I would rather be dead then to ever be a slave like so many of you are. Keep them ignorant, keep them docile, keep them complacent, keep them consuming, whatever it takes to distract YOU from YOU. At least I am trying to help, what are YOU doing about anything? Now obviously this post doesn’t apply to those of us/you in the know. “It is the task of the enlightened to help free the unenlightened, even under a prospect of death”…Plato. But if most of you are simply just incapable of waking up because your so consumed into your egos, there is nothing I/we can do to help you. If you can’t help yourself, how are we supposed to help you? It’s impossible, not because of us, because of YOU. The separation lies within the ignorance of the masses, not with those trying to help all of you. But again, I know it all falls mostly on deaf ears. The time when the great change comes grows closer and closer and closer. When it all goes down, what will YOU do? Is your soul prepared?…because relying on your ego means you are already dead. Living as a slave, means you’re already dead. If you aren’t living free, then you’re just dying as a slave. YOU make that choice, not me, not this Nazi idiot fascist puppet terrorist president and his regime, not the globalist banker scum giving you scraps from their table, it’s YOU. YOU have the power to rise up, but what do most of you do?…change the channel. Like I said, it’s YOUR issue, not anyone else’s. Wake up before it’s too late and YOU no longer have the choice. Heed what I say or don’t, up to YOU. Wide eyes open. Love to all.

Right now, unfolding is yet another shooting event, taking place right in FEMA region 3, the Washington, DC area. There is a “shelter in place” order in effect, which is there new terminology for stay locked in your house while we go door to door in a militant fashion until said shooter/s is/are found. Another false flag? Another shooting event? Another media spun story? I told you, more and more and more of these events are coming, all leading up to what?… That’s the big question isn’t it? Right now there is nothing known for certain other that there have been reports of shots fired near the Senator Hart office building. THAT’S IT RIGHT NOW. Story is breaking now. 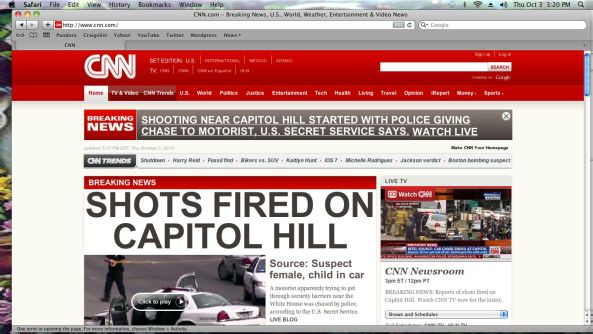 >>UPDATE<<  Reports that suspect is female, child in car, and is possibly being pursued or was pursued in a vehicle. One cop injured. Apparently it all began with a car slamming into a gate. Now let’s all watch how this goes from what I just said was reported….verbatim…AND showed you above… to what actually comes out over the next few days. This is a great chance to scrutinize the MSM and the reporting they give to all of YOU. Remember, it’s a story, a script, or is it? Was this a real event? Another drill?  I’m not claiming either way, I am simply pointing out that NOW is a great time to observe how the mainstream media operates and figure it out for yourselves. Much more to come…