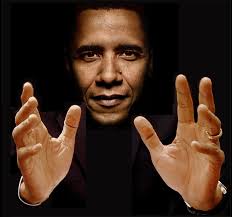 I just watched Der Fuhrer Obama’s latest speech live on the MSM. He went over 4 or 5 points about different things he wants to improve. He actually hit several nails on their heads but the problem is… IT”S ALL TALK. I can guarantee you not a single thing he proposed to do will get done. His theme was this “Grand Bargain” for the middle-class. What grand bargain? Talk, talk, talk, talk, talk. He said we need to export more goods, CEOs need to increase training for the rehiring of unemployed workers, blames a group of Republicans for the bad press on Obamacare and that sham of a plan, all fluff and smoke and mirrors. Nothing will come of this. This guy is a good actor, for a globalist puppet. That’s why he was selected as president, not elected.

The worst part about these speech events of Obama’s are the people in attendance. All hand-picked Obamadrones. No one allowed in with a real opinion, only those who follow this guy like a herd of sheep grazing under their shepherd. They clap on cue, they laugh on cue, all a big facade, a production, an orchestration. All the while, the President’s only real concern is getting back on vacation. This  seems to be this guy’s only real agenda. Nothing is changing for the better, everything is getting worse. What’s going to happen when it gets so bad that the pot boils over? How is this maniac still in office? Because he was selected, I told you. And his security is the tightest there has ever been for any other President, just as one would expect any mafia don to be. There’s no stopping this regime, at least in their mind. They have an agenda, and the Obama puppet just follows his real orders which are to fuck off while the economy collapses. They want it to fall so they can rebuild stronger from the rubble, divide and conquer, order from chaos, it’s a shame that 85 to 90% of the public has no clue what is really going on, but every day more and more are waking up. I’m not going to get into one of my rants. I’m not going to go off on all this President’s crap that he spews upon his followers like baby birds. I am only here to translate, and today I am translating that everything President Obama just made a speech about was bullshit. This post has a time-stamp. In one year, we will see how many of the objectives he outlines in this speech come to fruition. What do you think it will be like in one year?

Enough of Der Fuhrer Obama, another story just breaking is the announcement that Pfc Bradley Manning was found “not guilty” of the main charge, That’s what you see on the MSM report…”not guilty, not guilty.” What most people haven’t seen in the fine print is that he IS guilty of lesser charges that could still get him up to 20 years in prison. So he is guilty, but the MSM spin splatters the words “not guilty” everywhere. Why would they do this? It’s puzzling, isn’t it? Google his name right now and you will read “not guilty.” But just like an infomercial, there is always more in the details and those details are that he is in fact “guilty” of lesser charges that will keep him locked up. He has already served 3 years, and he faces up to 20 more,… where is the “not guilty” in that?

Just another example of a system that is so corrupt and maladjusted, it’s amazing that it still manages to function at all. It cannot keep functioning at this level, but for now, we still have these media spun court cases to distract everyone from what the globalist pig scum are doing behind the scenes. What’s next? Have we run out of people who are on trial for something on the news? What’s the misdirection away from anything significant really going on the world. Yet another jailbreak in the Middle East, I think a few hundred more inmates are now free, at least that is what they tell everyone. “What is that leading up to?” you may be wondering… give it a few weeks and that bee’s nest will be stirred up again, you’ll see. So much chaos, so much conflict, so much ignorance, can you imagine what aliens must think of us right now? They observe from  a distance while an entire species behaves and acts just like a plague or a virus or a cancer on this planet, when it has the potential to be the opposite… taking care of nature, compassion for one another, prosperity through the good will and benevolence of human beings that aspire to become their higher selves. I’m giving you lots of pictures, portraits of plausibilities if humanity as a whole doesn’t blow it at the crucial moment. Is that moment coming? As I asked above, what do you think will be happening one year from now? What if your money runs out or your lights go off, what will you do when the system comes crashing down on YOU? Is life still a time of happiness for most, are have most become mired in the depressiveness of being under-employed with the time running out? It’s a strange paradigm we are all together, a paradigm based on a fractional few that control the many via a global monetary debt slavery apparatus. Is that what it is to live and be alive? To be a servant to this apparatus, is that what life is? You want to say, “Not my life,” but how can you escape it, how can you truly be free from the shackles money? You have to eat, you need shelter, and without money, is it rationally feasible that any random person can just pop off the grid and live off the land? Like an infection that has spread to everyone though, this cycle of consumption via money never ever ends. On that note, I’ve hit a thousand words. I feel a thousand words is a good number of words for a reasonably informational blog post. Not too long, not too short, just enough to get all of you an information fix for the day. That’s why I’m here, helping all of you help yourselves. Wide eyes open. Love to all.